At the end of 2011, the WS3600 started to give serious problems. the Anemometer was making a lot of noise and then the outside temperature sensor failed. Spares were not available and so it was time for a change. The TFA-NEXUS weather station is far more modern with a USB interface for data collection and better logging facilities. Logging was set for every 30 minutes. The sensors have been mounted on the end of the garage which is no different for the rain and temperature but the anemometer is much lower and better shielded from the real wind speeds. However the current location is better for maintenance. 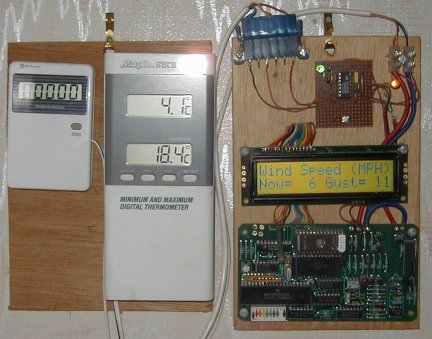 I started collecting weather data in October 1992 here in Slip End. The weather station started out as a simple but effective home made set up. The picture on the right shows the inside bits, rain gauge, max/min thermometer and the anemometer. The collection point for the rain gauge was on the garage roof and the head for the anemometer was on the roof of the house.

My interest in weather data started at school as part of a geography project and for a long while I kept records while at home in Wales. These were later a source of data when learning programming at college.

However in September 2002 a major part of the home built system failed and I replaced it with a ready made wireless system. The outdoor temperature sensor and rain gauge was on the garage roof as can be seen to the right while the display unit gives better information and includes a simple barograph.

The new anemometer showed that the old home made one was not giving accurate readings. I suspect that the old one developed a fault in early 2002 and had been providing inaccurate data for a while.

During 2005 the wireless system proved to be a problem especially at the end of a period of high pressure. Local interference caused the base unit to lose contact with the remote sensors and some data was lost. The rain gauge was affected more than anything else and for a while I had to rely on the old trusty funnel and a measuring cylinder. 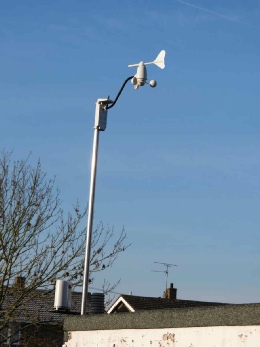 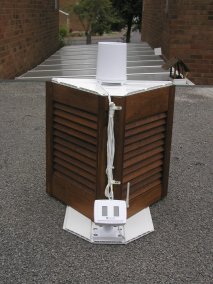 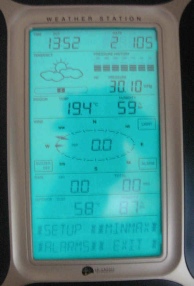 Alison brought me a new weather station for my 2005 Christmas present. The La Crosse WS3600 was installed on the 2nd January 2006. The remote sensors can be wireless but with the previous experience, I hard wired them to the base unit. The base unit can also be connected to a PC and the log of data can be downloaded. I then set the logging for every 60 minutes to give me far more detailed information each month. 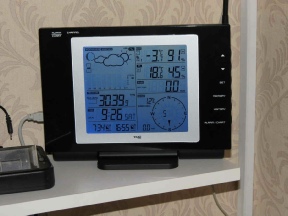 During 2016 we were finding that some of the 433MHz wireless sensor transmitters where being interfered with by local taxi transmissions and the wireless handsets for the garden railway. This caused the loss of data for periods of time until the interference went away and the system found the transmitters again.

In November 2016, the system was replaced with a Davis Vantage Vue system. The main transmitter head is all in one and works on the 860MHz band. 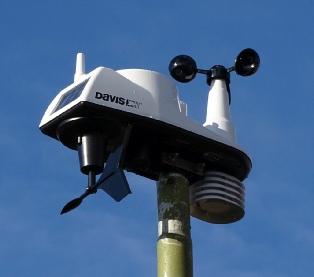